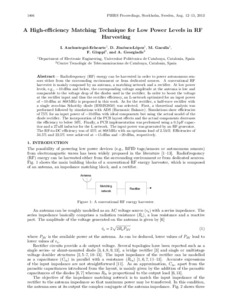 Giuppi, Francesco
Georgiadis, Apostolos
Document typeConference report
PublisherThe Electromagnetics Academy
Rights accessOpen Access
Abstract
Radiofrequency (RF) energy can be harvested in order to power autonomous sensors either from the surrounding environment or from dedicated sources. A conventional RF harvester is mainly composed by an antenna, a matching network and a rectifier. At low power levels, e.g., -10dBm and below, the corresponding voltage amplitude at the antenna is low and comparable to the voltage drop of the diodes used in the rectifier. In order to boost the voltage at the rectifier input and thus the rectifier efficiency, an L-network optimized for an input power of -10dBm at 868MHz is proposed in this work. As for the rectifier, a half-wave rectifier with a single zero-bias Schottky diode (HSMS2850) was selected. First, a theoretical analysis was performed followed by simulations with ADS (Harmonic Balance). Simulations show efficiencies of 75% for an input power of -10dBm with ideal components but using the actual model of the diode rectifier. The incorporation of the PCB layout effects and the actual components decreases the efficiency to below 50%. Finally, a PCB implementation was performed using a 0.5 pF capacitor and a 27 nH inductor for the L network. The input power was generated by an RF generator. The RF-to-DC efficiency was of 45% at 868 MHz with an optimum load of 2.5 k¿. Efficiencies of 34.5% and 22.5% were achieved at -15dBm and -20dBm, respectively.
CitationAnchustegui-Echearte, I. [et al.]. A high-efficiency matching technique for low power levels in RF harvesting. A: Progress in Electromagnetics Research Symposium. "PIERS 2013 Stockholm - Progress In Electromagnetics Research Symposium. Proceedings". Stockholm: The Electromagnetics Academy, 2013, p. 1806-1810.
URIhttp://hdl.handle.net/2117/22874
ISBN978-1-934142-26-4
Publisher versionhttp://piers.org/piersproceedings/download.php?file=cGllcnMyMDEzU3RvY2tob2xtfDRQNWFfMTgwNi5wZGZ8MTMwNjE3MjE1MDEy
Collections
Share: