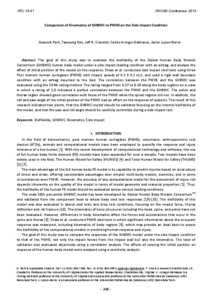 Document typeConference lecture
Rights accessOpen Access
Abstract
The goal of this study was to evaluate the biofidelity of the Global Human Body Models Consortium (GHBMC) human body model under a side impact loading condition with an airbag, and analyze the effect of initial position of the model on the response. Shaw et al. conducted side impact sled tests using three Post mortem human surrogates (PMHS) with impact speeds of 4.3 ± 0.1 m/s, and used a rigid wall boundary condition with an airbag mounted to the sled. The correlation between the PMHS and the GHBMC was evaluated using the CORA rating method. The rating ranged from 0.27 to 0.69 along the body regions on a scale in which a rating of 1.0 indicated a perfect correlation between the PMHS and the GHBMC. The pelvis and thorax region showed good correlation with those of the PMHS while the spinal regions did not. In addition, the roll and yaw angle of the initial position of the PMHS had an effect on the response of subjects. The result of this research indicated two points, that the GHBMC model should be validated focusing on the internal biofidelity of the model, and that the yaw and roll angle should be carefully controlled during a side impact test.
CitationPark, G. [et al.]. Comparison of kinematics of GHBMC to PMHS on the side impact condition. A: International Research Council on the Biomechanics of Injury Conference. "2013 IRCOBI Conference Proceedings". Gothenburg: 2013, p. 368-379.
URIhttp://hdl.handle.net/2117/22867
Publisher versionhttp://www.ircobi.org/downloads/irc13/pdf_files/41.pdf
Collections
Share: