MOCCA: an environment for CSCW applications. 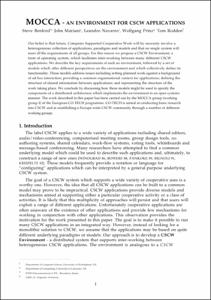 Prinz, Wolfgang
Rodden, Tom
Document typeConference report
PublisherAssociation for Computing Machinery
Rights accessOpen Access
Abstract
Our belief is that future, Computer Supported Cooperative Work will by necessity involve a heterogeneous collection of applications, paradigms and models and that no single system will meet all the requirements of all groups. For this reason we propose a CSCW Environment, a form of operating system, which facilitates inter-working between many different CSCW applications. We describe the key requirements of such an environment, followed by a set of models which offer different perspectives on the environment and which collectively define its functionality. These models address issues including setting planned work against a background of ad-hoc interaction; providing a common organisational context for applications; defining the structure of shared information between applications; and representing the structure of the work taking place. We conclude by discussing how these models might be used to specify the components of a distributed architecture which implements the environment in an open systems manner. The work described in this paper has been carried out by the MOCCA group (working group 2) of the European CO-TECH programme. CO-TECH is aimed at conducting basic research into CSCW and at establishing a Europe-wide CSCW community through a number of different working groups.
CitationBenford, S; Mariani, J.A; Navarro, L; Prinz, W; Rodden, T. MOCCA: an environment for CSCW applications. A: COCS'93, p. 172-177.
URIhttp://hdl.handle.net/2117/2283
ISBN0-89791-627-1
Publisher versionhttp://doi.acm.org/10.1145/168555.168573
Collections
Share: