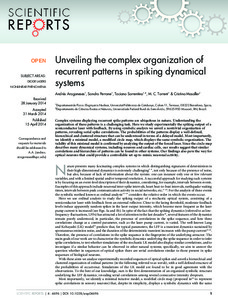 Document typeArticle
PublisherMACMILLAN PUBLISHERS LIMITED
Rights accessOpen Access
Abstract
Complex systems displaying recurrent spike patterns are ubiquitous in nature. Understanding the organization of these patterns is a challenging task. Here we study experimentally the spiking output of a semiconductor laser with feedback. By using symbolic analysis we unveil a nontrivial organization of patterns, revealing serial spike correlations. The probabilities of the patterns display a well-defined, hierarchical and clustered structure that can be understood in terms of a delayed model. Most importantly, we identify a minimal model, a modified circle map, which displays the same symbolic organization. The validity of this minimal model is confirmed by analyzing the output of the forced laser. Since the circle map describes many dynamical systems, including neurons and cardiac cells, our results suggest that similar correlations and hierarchies of patterns can be found in other systems. Our findings also pave the way for optical neurons that could provide a controllable set up to mimic neuronal activity.
CitationAragoneses, A. [et al.]. Unveiling the complex organization of recurrent patterns in spiking dynamical systems. "Scientific reports", 15 Abril 2014, vol. 4, p. 4696-1-4696-6.
URIhttp://hdl.handle.net/2117/22813
DOI10.1038/srep04696
ISSN2045-2322
Publisher versionhttp://www.nature.com/srep/2014/140415/srep04696/full/srep04696.html
Collections
Share: