How kilometric sandy shoreline undulations correlate with wave and morphology characteristics: preliminary analysis on the Atlantic coast of Africa 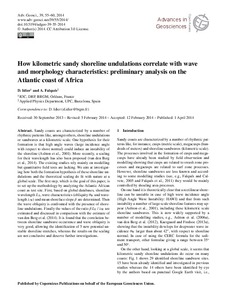 Sandy coasts are characterized by a number of rhythmic patterns like, amongst others, shoreline undulations or sandwaves at a kilometric scale. One hypothesis for their formation is that high angle waves (large incidence angle with respect to shore normal) could induce an instability of the shoreline (Ashton et al., 2001). More recently, a scaling for their wavelength has also been proposed (van den Berg et al., 2014). The existing studies rely mainly on modelling but quantitative field tests are lacking. We aim at investigating how both the formation hypothesis of these shoreline undulations and the theoretical scaling do fit with nature at a global scale. The first step, which is the goal of this paper, is to set up the methodology by analyzing the Atlantic African coast as test site. First, based on global databases, shoreline wavelength LS, wave characteristics (obliquity ¿W and wavelength ¿W) and mean shoreface slope ß are determined. Then the wave obliquity is confronted with the presence of shoreline undulations. Finally the values of the ratio ßLS / ¿W are estimated and discussed in comparison with the estimate of van den Berg et al. (2014). It is found that the correlation between shoreline sandwave occurrence and wave obliquity is very good, allowing the identification of 5 new potential unstable shoreline stretches, whereas the results on the scaling are not conclusive and deserve further investigations.
CitationIdier, D.; Falques, A. How kilometric sandy shoreline undulations correlate with wave and morphology characteristics: preliminary analysis on the Atlantic coast of Africa. "Advances in geosciences", 01 Abril 2014, vol. 39, p. 55-60.
URIhttp://hdl.handle.net/2117/22793
DOI10.5194/adgeo-39-55-2014
ISSN1680-7359
Publisher versionhttp://www.adv-geosci.net/39/55/2014/adgeo-39-55-2014.pdf