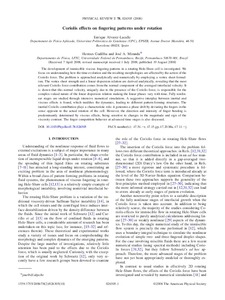 Show full item record
Alvarez-Lacalle, Enrique
Gadelha, Hermes
Miranda, José A.
Document typeArticle
PublisherAmerican Physical Society
Rights accessOpen Access
Abstract
The development of immiscible viscous fingering patterns in a rotating Hele-Shaw cell is investigated. We focus on understanding how the time evolution and the resulting morphologies are affected by the action of the Coriolis force. The problem is approached analytically and numerically by employing a vortex sheet formalism. The vortex sheet strength and a linear dispersion relation are derived analytically, revealing that the most relevant Coriolis force contribution comes from the normal component of the averaged interfacial velocity. It is shown that this normal velocity, uniquely due to the presence of the Coriolis force, is responsible for the complex-valued nature of the linear dispersion relation making the linear phases vary with time. Fully nonlinear stages are studied through intensive numerical simulations. A suggestive interplay between inertial and viscous effects is found, which modifies the dynamics, leading to different pattern-forming structures. The inertial Coriolis contribution plays a characteristic role: it generates a phase drift by deviating the fingers in the sense opposite to the actual rotation of the cell. However, the direction and intensity of finger bending is predominantly determined by viscous effects, being sensitive to changes in the magnitude and sign of the viscosity contrast. The finger competition behavior at advanced time stages is also discussed
CitationAlvarez-Lacalle, E.; Gadelha, H.; Miranda, J. A.;. (2008). Coriolis effects on fingering patterns under rotation . Physical Review E, 78 (2): 26305(1)-26305(10). ISSN:1539-3755
URIhttp://hdl.handle.net/2117/22776
ISSN1539-3755
Publisher versionhttp://journals.aps.org/pre/abstract/10.1103/PhysRevE.78.026305
Collections
Share: