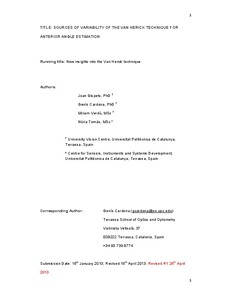 Except where otherwise noted, content on this work is licensed under a Creative Commons license : Attribution-NonCommercial-NoDerivs 3.0 Spain
Abstract
BackgroundThe purpose of the present study was to investigate two potential sources of variability of the traditional van Herick technique for temporal anterior chamber angle estimation, namely the need to compare the depth of the peripheral anterior chamber (PACD) with the thickness of the peripheral cornea (PCT), and the possible loss of information resulting from restricting the assessment of the anterior chamber angle (ACA) to the temporal limbus.; MethodsBoth image analysis and Scheimpflug photography were employed to measure PCT and PACD in a group of 82 eyes (mean SD age of 32.8 4.1 years) with and without narrow anterior chamber angles. Subjective and semi-objective van Herick grades were compared and the relationship between PCT and PACD was investigated. Scheimpflug photography was also used to determine the value of the narrowest anterior chamber angle and to compare it with the temporal angle.; ResultsNo statistically significant differences were encountered between semi-objective and subjective grades. A weak statistically significant correlation was found between image analysis values for PCT and PACD (r = 0.295; p = 0.007). Upon examining Scheimpflug photographic data, no statistically significant association between PCT and PACD was revealed. Temporal and minimum anterior chamber angles presented statistically significant differences (t = 7.213; p < 0.001). In approximately 65 per cent of the patients, the minimum ACA was not located at the temporal limbus, with a difference of up to 9.8 degrees between minimum and temporal angles.; ConclusionThe encountered association between the image analyses of PCT and PACD advocates for the direct measurement of PACD as a better estimation of ACA depth than the ratio between PCT and PACD. All anterior chamber quadrants should be examined, as the minimum ACA may not be located temporally.
CitationGispets, J. [et al.]. Sources of variability of the van Herick technique for anterior angle estimation. "Clinical and experimental optometry", 01 Març 2014, vol. 97, núm. 2, p. 147-151.
URIhttp://hdl.handle.net/2117/22600
DOI10.1111/cxo.12094
ISSN0816-4622
Publisher versionhttp://onlinelibrary.wiley.com/doi/10.1111/cxo.12094/abstract
Collections
Share: