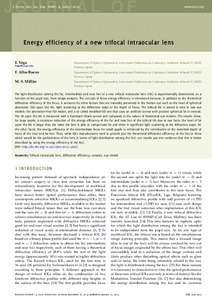 Document typeArticle
Rights accessOpen Access
Abstract
The light distribution among the far, intermediate and near foci of a new trifocal intraocular lens (IOL) is experimentally determined, as a function of the pupil size, from image analysis. The concept of focus energy efficiency is introduced because, in addition to the theoretical diffraction efficiency of the focus, it accounts for other factors that are naturally presented in the human eye such as the level of spherical aberration (SA) upon the IOL, light scattering at the diffractive steps or the depth of focus. The trifocal IOL is tested in-vitro in two eye models: the aberration-free ISO model, and a so called modified-ISO one that uses an artificial cornea with positive spherical SA in instead. The SA upon the IOL is measured with a Hartmann-Shack sensor and compared to the values of theoretical eye models. The results show, for large pupils, a notorious reduction of the energy efficiency of the far and near foci of the trifocal IOL due to two facts: the level of SA upon the IOL is larger than the value the lens is able to compensate for and there is significant light scattering at the diffractive steps. On the other hand, the energy efficiency of the intermediate focus for small pupils is enhanced by the contribution of the extended depth of focus of the near and far foci. Thus, while IOLs manufacturers tend to provide just the theoretical diffraction efficiency of the foci to show which would be the performance of the lens in terms of light distribution among the foci, our results put into evidence that this is better described by using the energy efficiency of the foci.
CitationVega, F.; Alba, F.; Millan, M. Energy efficiency of a new trifocal intraocular lens. "Journal of the European Optical Society: rapid publications", 15 Gener 2014, vol. 9, p. 14002-1-14002-8.
URIhttp://hdl.handle.net/2117/22586
DOI10.2971/jeos.2014.14002
ISSN1990-2573
Collections
Share: