Assessment methodology for the prediction of landslide dam hazard 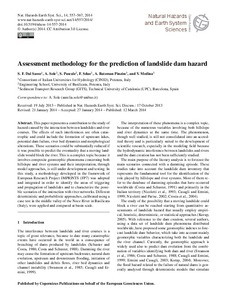 Document typeArticle
Rights accessOpen Access
Abstract
This paper represents a contribution to the study of hazard caused by the interaction between landslides and river courses. The effects of such interferences are often catastrophic and could include the formation of upstream lakes, potential dam failure, river bed dynamics and morphological alterations. These scenarios could be substantially reduced if it was possible to predict the eventuality that a moving landslide would block the river. This is a complex topic because it involves composite geomorphic phenomena concerning both hillslope and river systems and their interpretation, through model approaches, is still under development and testing. In this study, a methodology developed in the framework of European Research Project IMPRINTS (FP7) was adopted and integrated in order to identify the areas of triggering and propagation of landslides and to characterize the possible scenarios of the interaction with river networks. Different deterministic and probabilistic approaches, calibrated using a case test in the middle valley of the Noce River in Basilicata (Italy), were applied and compared at basin scale.
CitationDel Sasso, S.F [et al.]. Assessment methodology for the prediction of landslide dam hazard. "Natural hazards and Earth system sciences", Març 2014, vol. 14, núm. 3, p. 557-567.
URIhttp://hdl.handle.net/2117/22582
DOI10.5194/nhess-14-557-2014
ISSN1561-8633
Publisher versionhttp://www.nat-hazards-earth-syst-sci.net/14/557/2014/nhess-14-557-2014.html
Collections
Share: