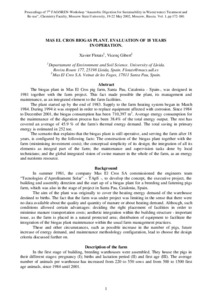 Gibert, Vicenç
Document typeConference report
Rights accessOpen Access
Abstract
The biogas plant in Mas El Cros pig farm, Santa Pau, Catalonia - Spain-, was designed in 1981 together with the farm project. This fact made possible the plant, its management and maintenance, as an integrated element to the farm facilities. The plant started up by the end of 1983. Supply to the farm heating system began in March 1984. During 1994 it was stopped in order to replace equipment affected with corrosion. Since 1984 to December 2001, the biogas consumption has been 710,397 m 3 . Average energy consumption for the maintenance of the digestion process has been 38.4% of the total energy output. The rest has covered an average of 45.9 % of the farm's thermal energy demand. The total saving in primary energy is estimated in 252 toe. The scenario that explains that the biogas plant is still operative, and serving the farm after 18 years, is configured by the following facts: The construction of the biogas plant together with the farm (minimising investment costs); the conceptual simplicity of its design; the integration of all its elements as integral part of the farm; the maintenance and supervision tasks done by local technicians; and the global integrated vision of swine manure in the whole of the farm, as an energy and nutrients resource
CitationFlotats, X.; Gibert, V. Mas El cros biogas plant. Evaluation of 18 years in operation. A: Anaerobic Digestion for Sustainability in Waste (water) Treatment and Re-use. "Proceedings of 7th FAO/SREN-Workshop “Anaerobic Digestion for Sustainability in Waste(water) Treatment and Re-use". Moscow: 2002, p. 1-8.
URIhttp://hdl.handle.net/2117/22518
Collections
Share: