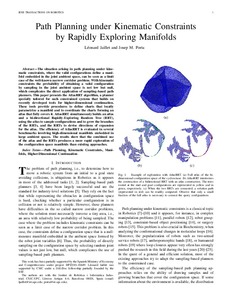 Document typeArticle
Rights accessOpen Access
Abstract
The situation arising in path planning under kinematic constraints, where the valid configurations define a manifold embedded in the joint ambient space, can be seen as a limit case of the well-known narrow corridor problem. With kinematic constraints, the probability of obtaining a valid configuration by sampling in the joint ambient space is not low but null, which complicates the direct application of sampling-based path planners. This paper presents the AtlasRRT algorithm, which is a planner especially tailored for such constrained systems that builds on recently developed tools for higher-dimensional continuation. These tools provide procedures to define charts that locally parametrize a manifold and to coordinate the charts, forming an atlas that fully covers it. AtlasRRT simultaneously builds an atlas and a bidirectional rapidly exploring random tree (RRT), using the atlas to sample configurations and to grow the branches of the RRTs, and the RRTs to devise directions of expansion for the atlas. The efficiency of AtlasRRT is evaluated in several benchmarks involving high-dimensional manifolds embedded in large ambient spaces. The results show that the combined use of the atlas and the RRTs produces a more rapid exploration of the configuration space manifolds than existing approaches.
CitationJaillet, L.G.; Porta, J.M. Path planning under kinematic constraints by rapidly exploring manifolds. "IEEE transactions on robotics", 2013, vol. 29, núm. 1, p. 105-117.
URIhttp://hdl.handle.net/2117/22501
DOI10.1109/TRO.2012.2222272
ISSN1552-3098
Publisher versionhttp://dx.doi.org/10.1109/TRO.2012.2222272
Collections
Share: