On the entrainment coefficient in a forced plume: quantitative effects of source parameter 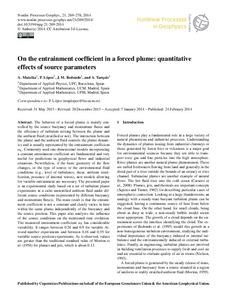 The behavior of a forced plume is mainly controlled by the source buoyancy and momentum fluxes and the efficiency of turbulent mixing between the plume and the ambient fluid (stratified or not). The interaction between the plume and the ambient fluid controls the plume dynamics and is usually represented by the entrainment coefficient aE. Commonly used one-dimensional models incorporating a constant entrainment coefficient are fundamental and very useful for predictions in geophysical flows and industrial situations. Nevertheless, if the basic geometry of the flow changes, or the type of source or the environmental fluid conditions (e.g., level of turbulence, shear, ambient stratification, presence of internal waves), new models allowing for variable entrainment are necessary. The presented paper is an experimental study based on a set of turbulent plume experiments in a calm unstratified ambient fluid under different source conditions (represented by different buoyancy and momentum fluxes). The main result is that the entrainment coefficient is not a constant and clearly varies in time within the same plume independently of the buoyancy and the source position. This paper also analyzes the influence of the source conditions on the mentioned time evolution. The measured entrainment coefficient aE has considerable variability. It ranges between 0.26 and 0.9 for variable Atwood number experiments and between 0.16 and 0.55 for variable source position experiments. As is observed, values are greater than the traditional standard value of Morton et al. (1956) for plumes and jets, which is about 0.13
CitationMatulka, A.M. [et al.]. On the entrainment coefficient in a forced plume: quantitative effects of source parameter. "Nonlinear processes in geophysics", 24 Febrer 2014, vol. 21, núm. 1, p. 269-278.
URIhttp://hdl.handle.net/2117/22461
DOI10.5194/npg-21-269-2014
ISSN1023-5809
Publisher versionhttp://www.nonlin-processes-geophys.net/21/269/2014/npg-21-269-2014.pdf