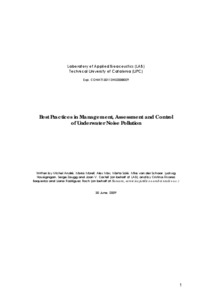 Document typeExternal research report
Rights accessOpen Access
Abstract
The origin of this work can be found in the project ‘Effects and Control of Anthropogenic Noise in Marine Ecosystems’ in the part relative to legal initiatives. In the first phase of the Report on this Project (December 2008) it was concluded that the level of complexity of marine issues, united by the fact that wide scientific gaps and difficulties still need to be covered and resolved, counseled against the immediate drawing up of legal projects concerning underwater acoustic pollution. Nevertheless, it was suggested that a document of ‘Best Practices’ be elaborated to focus on the ‘state of the art’ of this issue, and that it be used by public administrations and promoters of projects that will cause acoustic pollution, as much within the framework of environmental impact assessments as in management development plans in protected marine areas. It is of vital importance that activities, which generate acoustic pollution in the oceans, be monitored. Accordingly, this document could derive, in the short term, a Protocol of Applications which will in its own time open the way for the preparation of, if necessary, legislative initiatives within their own right.
CitationAndre, M. [et al.]. "Best practices in management, assessment and control of underwater noise pollution". 2009.
URIhttp://hdl.handle.net/2117/22457
URL other repositoryhttp://www.lab.upc.edu/papers/BestPracticesNoiseLAB.pdf
Collections
Share: