A description of auto-fixed subgroups in a free group 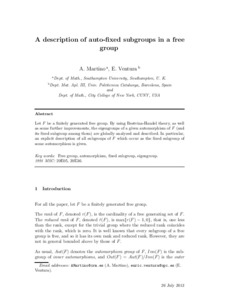 Let F be a finitely generated free group. By using Bestvina-Handel theory, as well as some further improvements, the eigengroups of a given automorphism of F (and its fixed subgroup among them) are globally analyzed and described. In particular, an explicit description of all subgroups of F which occur as the fixed subgroup of some automorphism is given.
CitationMartino, A.; Ventura, E. A description of auto-fixed subgroups in a free group. "Topology", Juny 2004, vol. 43, núm. -, p. 1133-1164.
URIhttp://hdl.handle.net/2117/22454
DOI10.1016/j.top.2004.01.003
ISSN0040-9383