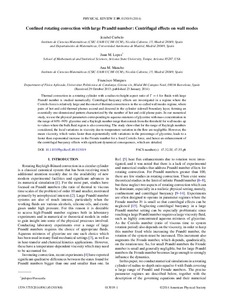 Thermal convection in a rotating cylinder with a radius-to-height aspect ratio of G=4 for fluids with large Prandtl number is studied numerically. Centrifugal buoyancy effects are investigated in a regime where the Coriolis force is relatively large and the onset of thermal convection is in the so-called wall modes regime, where pairs of hot and cold thermal plumes ascend and descend in the cylinder sidewall boundary layer, forming an essentially one-dimensional pattern characterized by the number of hot and cold plume pairs. In our numerical study, we use the physical parameters corresponding to aqueous mixtures of glycerine with mass concentration in the range of 60%-90% glycerine and a Rayleigh number range that extends from the threshold for wall modes up to values where the bulk fluid region is also convecting. The study shows that for the range of Rayleigh numbers considered, the local variations in viscosity due to temperature variation in the flow are negligible. However, the mean viscosity, which varies faster than exponentially with variations in the percentage of glycerine, leads to a faster than exponential increase in the Froude number for a fixed Coriolis force, and hence an enhancement of the centrifugal buoyancy effects with significant dynamical consequences, which are detailed. © 2014 American Physical Society.
CitationCurbelo, J. [et al.]. Confined rotating convection with large Prandtl number: centrifugal effects on wall modes. "Physical review E: statistical, nonlinear, and soft matter physics", 23 Gener 2014, vol. 89, núm. 1, p. 1-8.
URIhttp://hdl.handle.net/2117/22400
DOI10.1103/PhysRevE.89.013019
ISSN1539-3755
Publisher versionhttp://journals.aps.org/pre/abstract/10.1103/PhysRevE.89.013019