Non-integrability of some hamiltonians with rational potentials 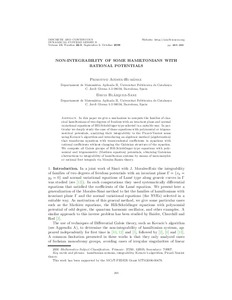 Show full item record
Acosta Humánez, Primitivo Belén
Blázquez Sanz, David
Document typeArticle
Rights accessOpen Access
Abstract
In this paper we give a mechanism to compute the families of classical hamiltonians of two degrees of freedom with an invariant plane and normal variational equations of Hill-Schr\"odinger type selected in a suitable way. In particular we deeply study the case of these equations with polynomial or trigonometrical potentials, analyzing their integrability in the Picard-Vessiot sense using Kovacic's algorithm and introducing an algebraic method (algebrization) that transforms equations with transcendental coefficients in equations with rational coefficients without changing the Galoisian structure of the equation. We compute all Galois groups of Hill-Schr\"odinger type equations with polynomial and trigonometric (Mathieu equation) potentials, obtaining Galoisian obstructions to integrability of hamiltonian systems by means of meromorphic or rational first integrals via Morales-Ramis theory.
CitationAcosta-Humanez, P.; Blazquez-Sanz, D. Non-integrability of some hamiltonians with rational potentials. Discrete and Continuous Dynamical Systems Series B, 2008, vol. 10, p. 265-293.
URIhttp://hdl.handle.net/2117/2236
Collections
Share: