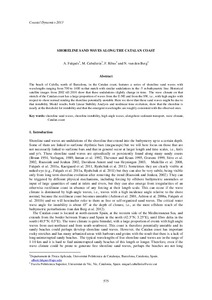 Van den Berg, Niels
Document typeConference lecture
Rights accessOpen Access
Abstract
The beach of Calella, north of Barcelona, in the Catalan coast, features a series of shoreline sand waves with wavelengths ranging from 700 to 1400 m that match with similar undulations in the -5 m bathymetric line. Historical satellite images from 2002 till 2010 show that these undulations slightly change in time. The wave climate on that stretch of the Catalan coast has a large proportion of waves from the E-NE and from the SW, i.e., with high angles with respect to shore normal rending the shoreline potentially unstable. Here we show that those sand waves might be due to that instability. Model results, both Linear Stability Analysis and nonlinear time evolution, show that the shoreline is nearly at the threshold for instability and that the emergent wavelengths are roughly consistent with the observed ones.
CitationFalques, A. [et al.]. Shoreline sand waves along the catalan coast. A: International Conference on Coastal Dynamics. "Extended Abstracts of Coastal Dynamics 2013". Arcachon: 2013, p. 575-584.
URIhttp://hdl.handle.net/2117/22299
Publisher versionhttp://www.coastaldynamics2013.fr/pdf_files/052_Falques_Albert.pdf
Collections
Share: