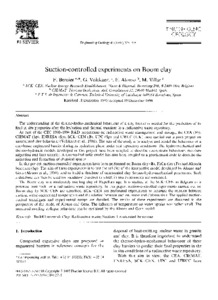 The understanding of the thermo-hydro-mechanical behaviour of a clay barrier is needed for the prediction of its final in situ properties after the hydration and thermal transient in a radioactive waste repository. As part of the CEC 1990-1994 R&D programme on radioactive waste management and storage, the CEA (Fr), CIEMAT (Sp). ENRESA (Sp). SCK CEN (B). UPC (Sp) and UWCC (UK) have carried out a joint project on unsaturated clay behaviour (Volckaert et al.. 1996). The aim of the study is to analyse and model the behaviour of a clay-based engineered barrier during its hydration phase under real repository conditions. The hydro-mechanical and thermo-hydraulic models developed in this project have been coupled to describe stress/strain behaviour, moisture migration and heat transfer. A thermo-hydraulic model has also been coupled to a geochemical code to describe the migration and formation of chemical species. In this project. suction-controlled experiments have been performed on Boom clay (B), FoCa clay (Fr) and Almeria bentonite (Sp). The aim of these experiments is to test the validity of the interpretive model developed by Alonso and Gens (Alonso et al., 1990). and to build a database of unsaturated clay thermo-hydro-mechanical parameters. Such a database can then be used for validation exercises in which in situ experiments are simulated. The Boom clay is a moderately swelling clay of Rupellian age. It is studied at the SCK. CEN in Belgium as a potential host rock for a radioactive waste repository. In this paper, suction-controlled experiments carried out on Boom clay by SCK CEN are described. SCK CEN has performed experiments to measure the relation between suction, water content and temperature and the relation between suction, stress and deformation. The applied suctioncontrol techniques and experimental setups are detailed. The results of these experiments are discussed in the perspective of the model of Alonso and Gens. The influence of temperature on water uptake was rather small. The measured swelling-collapse behaviour can be explained by the Alonso and Gens model.
CitationBernier, F. [et al.]. Suction-controlled experiments on Boom clay. Engineering geology (1997, vol. 47, no. 4, pp. 325-338).
URIhttp://hdl.handle.net/2117/2216
ISSN0013-7952