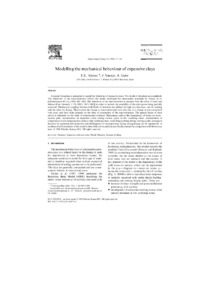 Document typeArticle
PublisherElsevier
Rights accessOpen Access
Abstract
A simple formalism is presented to model the behaviour of expansive clays. Two levels of structure are considered. The behaviour of the macrostructure follows the model developed for unsaturated materials by Alonso et al. [Ge´otechnique 40 (3) (1990) 405–430]. The behaviour of the microstructure is adapted from the work of Gens and Alonso [Can. Geotech. J. 29 (1992) 1013–1032] in order to include the possibility of the micropores being partially saturated. Mechanical coupling between both levels of structure are defined through two functions, one for wetting and the other for drying. They express the change in macrostructural void ratio due to a change in microstructural void ratio, and their value depends on the state of compaction of the macrostructure. The general shape of these curves is discussed on the basis of experimental evidence. Phenomena such as the dependency of strain on stress– suction path, accumulation of expansion strain during suction cycles at low confining stress, accumulation of compression strain during suction cycles at high confining stress, strain fatigue during drying–wetting cycles, macropore invasion by expanded microstructure and development of macroporosity during strong drying can be represented. A mathematical formulation of the model is described and its performance finally assessed by comparison with laboratory tests.
CitationAlonso, E.E.; Vaunat, J.; Gens, A. Modelling the mechanical behaviour of expansive clays. Engineering geology (1999, vol. 54, no. 1-2, pp. 173-183).
URIhttp://hdl.handle.net/2117/2214
ISSN0013-7952
Collections
Share: