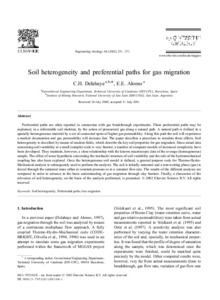 Preferential paths are often reported in connection with gas breakthrough experiments. These preferential paths may be explained, in a deformable soil skeleton, by the action of pressurised gas along a natural path. A natural path is defined in a spatially heterogeneous material by a set of connected spots of higher gas permeability. Along this path the soil will experience a marked desaturation and gas permeability will increase fast. The paper describes a procedure to simulate these effects. Soil heterogeneity is described by means of random fields, which describe the key soil properties for gas migration. Since actual data concerning soil variability at a small (sample) scale is very limited, a number of computer models of increased complexity have been developed. They maintain, however, a close relationship with the known macroscopic data of the average (homogeneous) sample. The effect of some hypothesis concerning the stochastic structure of soil variability and the role of the hydromechanical coupling has also been explored. Once the heterogeneous soil model is defined, a general purpose code for Thermo-Hydro- Mechanical analysis is subsequently used to perform the analysis. The soil is initially saturated and a non-wetting phase (gas) is forced through the saturated mass either at constant pressure or at a constant flow rate. The results of the different analyses are compared in order to advance in the basic understanding of gas migration through clay barriers. Finally, a discussion of the relevance of soil heterogeneity, on the basis of the analysis performed, is presented.
CitationDelahaye, C.H.; Alonso, E.E. Soil heterogeneity and preferential paths for gas migration. Engineering geology (2002, vol. 64, no. 2-3, pp. 251-271).
URIhttp://hdl.handle.net/2117/2211
ISSN0013-7952