Estimation of Parameters in Geotechnical Backanalysis: II. Application to a Tunnel Excavation Problem 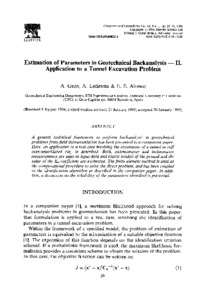 A general statistical framework to perform backanalysis in geotechnical problems from field instrumentation has been presented in a companion paper. Here, an application to a real case involving the excavation of a tunnel in stiff overconsolidated clay is described. Both, extensometer and inclinometer measurements are used as input data and elastic moduli of the ground and the value of the Ko coeficient are estimated. The finite element method is used as the computational procedure to solve the direct problem, and has been coupled to the identification algorithm as described in the companion paper. In addition, a discussion on the reliability of the parameters identified is presented.
CitationGens, A.; Ledesma, A.; Alonso, E.E. Estimation of Parameters in Geotechnical Backanalysis: II. Application to a Tunnel Excavation Problem. Computers and geotechnics (1996, vol. 18, no. 1, pp. 29-46).
URIhttp://hdl.handle.net/2117/2209