Spin-polarized hydrogen adsorbed on the surface of superfluid He-4 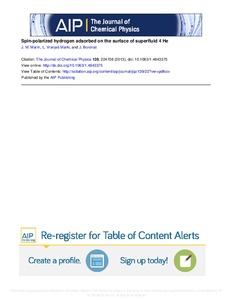 Document typeArticle
Rights accessOpen Access
Abstract
The experimental realization of a thin layer of spin-polarized hydrogen H double down arrow adsorbed on top of the surface of superfluid He-4 provides one of the best examples of a stable, nearly two-dimensional(2D) quantum Bose gas. We report a theoretical study of this system using quantum Monte Carlo methods in the limit of zero temperature. Using the full Hamiltonian of the system, composed of a superfluid He-4 slab and the adsorbed H double down arrow layer, we calculate the main properties of its ground state using accurate models for the pair interatomic potentials. Comparing the results for the layer with the ones obtained for a strictly 2D setup, we analyze the departure from the 2D character when the density increases. Only when the coverage is rather small the use of a purely 2D model is justified. The condensate fraction of the layer is significantly larger than in 2D at the same surface density, being as large as 60% at the largest coverage studied. (c) 2013 AIP Publishing LLC. [http://dx.doi.org/10.1063/1.4843375]
CitationMarín, J.; Leandra, V.; Boronat, J. Spin-polarized hydrogen adsorbed on the surface of superfluid He-4. "Journal of chemical physics", 14 Desembre 2013, vol. 139, núm. 22, p. 224708-1-224708-7.
URIhttp://hdl.handle.net/2117/22078
DOI10.1063/1.4843375
ISSN0021-9606
Publisher versionhttp://scitation.aip.org/content/aip/journal/jcp/139/22/10.1063/1.4843375
Collections
Share: