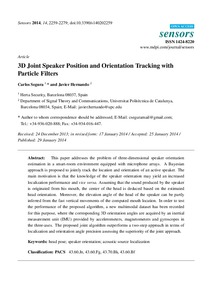 Except where otherwise noted, content on this work is licensed under a Creative Commons license : Attribution-NonCommercial-NoDerivs 3.0 Spain
Abstract
This paper addresses the problem of three-dimensional speaker orientation estimation in a smart-room environment equipped with microphone arrays. A Bayesian approach is proposed to jointly track the location and orientation of an active speaker. The main motivation is that the knowledge of the speaker orientation may yield an increased localization performance and vice versa. Assuming that the sound produced by the speaker is originated from his mouth, the center of the head is deduced based on the estimated head orientation. Moreover, the elevation angle of the head of the speaker can be partly inferred from the fast vertical movements of the computed mouth location. In order to test the performance of the proposed algorithm, a new multimodal dataset has been recorded for this purpose, where the corresponding 3D orientation angles are acquired by an inertial measurement unit (IMU) provided by accelerometers, magnetometers and gyroscopes in the three-axes. The proposed joint algorithm outperforms a two-step approach in terms of localization and orientation angle precision assessing the superiority of the joint approach.
CitationSegura, C.; Hernando, J. 3D joint speaker position and orientation tracking with particle filters. "Sensors", 29 Gener 2014, vol. 14, núm. 2, p. 2259-2279.
URIhttp://hdl.handle.net/2117/22012
DOI10.3390/s140202259
ISSN1424-8220
Publisher versionhttp://www.ncbi.nlm.nih.gov/pubmed/24481230
Collections
Share: