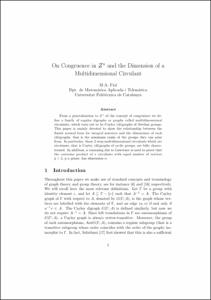 Document typeArticle
PublisherElsevier
Rights accessOpen Access
All rights reserved. This work is protected by the corresponding intellectual and industrial property rights. Without prejudice to any existing legal exemptions, reproduction, distribution, public communication or transformation of this work are prohibited without permission of the copyright holder
Abstract
From a generalization to $Z^n$ of the concept of congruence we define a family of regular digraphs or graphs called multidimensional circulants, which turn to be Cayley (di)graphs of Abelian groups. This paper is mainly devoted to show the relationship between the Smith normal form for integral matrices and the dimension of such (di)graphs, that is the minimum ranks of the groups they can arise from. In particular, those 2-step multidimensional circulant which are circulants, that is Cayley (di)graphs of cyclic groups, are fully characterized. In addition, a reasoning due to Lawrence is used to prove that the cartesian product of $n$ circulants with equal number of vertice $p>2$, $p$ a prime, has dimension $n$.
CitationFiol Mora, Miquel Àngel. "On congruence in $Z^n$ and the dimension of a multidimensional circulant". Discrete Mathematics, 1995, vol. 141, núm. 1-3, p. 123-134.
URIhttp://hdl.handle.net/2117/2200
Collections
Share: