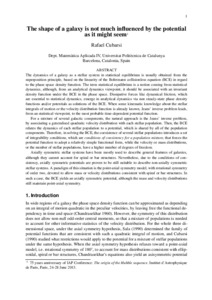 Document typeConference lecture
Rights accessOpen Access
Abstract
The dynamics of a galaxy as a stellar system in statistical equilibrium is usually obtained from the superposition principle, based on the linearity of the Boltzmann collisionless equation (BCE) in regard to the phase space density function. The term statistical equilibrium is a notion coming from statistical dynamics, although, from an analytical dynamics viewpoint, it should be associated with an invariant (conservative) density function under the BCE in the phase space. Similarly, dissipative forces like dynamical friction, which are essential to statistical dynamics, emerge in analytical dynamics via non steady-state phase density functions and/or potentials as solutions of the BCE. When some kinematic knowledge about the stellar integrals of motion or the velocity distribution function is already known, Jeans’ inverse problem leads, from an statistical viewpoint, to the most probable time-dependent potential function. For a mixture of several galactic components, the natural approach is the Jeans’ inverse problem, by associating a generalised quadratic velocity distribution with each stellar population. The BCE relates the dynamics of each stellar population to a potential, which is shared by all of the population components. The coexistence of several stellar populations introduces integrability conditions of consistency for a population mixture, that forces the potential function to adopt a relatively simple functional form, while the velocity distribution function has a higher number of degrees of freedom. Due to the conditions of consistency, axially symmetric potentials are proven to be still suitable to describe non-axially symmetric conservative stellar systems. A paradigm of this situation is the point-axial symmetry model, build for mass and velocity distributions to allow spiral or bar structures. The BCE yields an axially symmetric potential, although the mass and velocity distributions still maintain point-axial symmetry.
CitationCubarsi, R. The shape of a galaxy is not much influenced by the potential as it might seem. A: The origin of the Hubble sequence. "IAP Conference 2013". Paris: 2013, p. 1-6.
URIhttp://hdl.handle.net/2117/21962
Publisher versionhttps://dl.dropboxusercontent.com/u/659996/col2013/iap-2013-poster-cubarsi.pdf
Collections
Share: