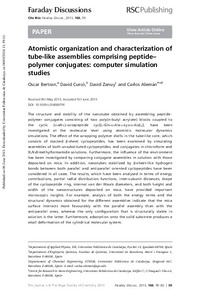 Document typeArticle
Rights accessOpen Access
Abstract
The structure and stability of the nanotube obtained by assembling peptide-polymer conjugates consisting of two poly(n-butyl acrylate) blocks coupled to the cyclic (D-alt-L)-octapeptide cyc[(L-Gln-D-Ala-L-Lys-D-Ala)(2)], have been investigated at the molecular level using atomistic molecular dynamics simulations. The effect of the wrapping polymer shells in the tube-like core, which consists of stacked beta-sheet cyclopeptides, has been examined by simulating assemblies of both unsubstituted cyclopeptides, and conjugates in chloroform and N,N-dimethylformamide solutions. Furthermore, the influence of the environment has been investigated by comparing conjugate assemblies in solution with those deposited on mica. In addition, nanotubes stabilized by beta-sheet-like hydrogen bonds between both parallel and antiparallel oriented cyclopeptides have been considered in all cases. The results, which have been analysed in terms of energy contributions, partial radial distribution functions, inter-subunit distances, shape of the cyclopeptide ring, internal van der Waals diameters, and both height and width of the nanostructures deposited on mica, have provided important microscopic insights. For example, analysis of both the energy terms and the structural dynamics obtained for the different assemblies indicate that the mica surface interacts more favourably with the parallel assembly than with the antiparallel ones, whereas the only configuration that is structurally stable in solution is the latter. Furthermore, adsorption onto the solid substrate produces a small deformation of the cylindrical molecular system
CitationBertran, O. [et al.]. Atomistic organization and characterization of tube-like assemblies comprising peptide-polymer conjugates: computer simulation studies. "FARADAY DISCUSSIONS", 2013, vol. 166, p. 59-82.
URIhttp://hdl.handle.net/2117/21873
DOI10.1039/c3fd00079f
ISSN1359-6640
Collections
Share: