Comparison of several geoid models over the Western Mediterranean Sea 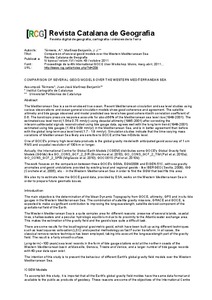