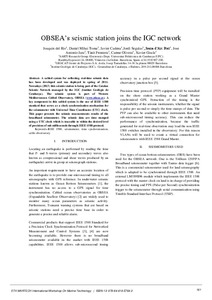 A cabled system for collecting real-time seismic data has been developed and was deployed in spring of 2011. Nowadays (2013) this seismic station is being part of the Catalan Seismic Network managed by the IGC (Institut Geològic de Catalunya). The seismic system is part of Western Mediterranean Cabled Observatory, OBSEA (www.obsea.es). A key component in this cabled system is the use of IEEE 1588 standard that serves as a clock synchronization mechanism for the seismometer with Universal Time Coordinates (UTC) clock. This paper presents the seismic measurements results of the broadband seismometer. The seismic data are time stamped using a UTC clock which is traceable to within the desired level of precision of sub milliseconds through IEEE 1588 protocol.
CitationDel Rio, J. [et al.]. OBSEA’s seismic station joins the IGC network. A: International Workshop on Marine Technology. "MARTECH 2013 : 5th International Workshop on Marine Technology :  9th - 11th October 2013, Girona". Girona: 2013, p. 161-165.
URIhttp://hdl.handle.net/2117/21858
ISBN978-84-616-5764-3
Publisher versionhttp://www.martech-workshop.org