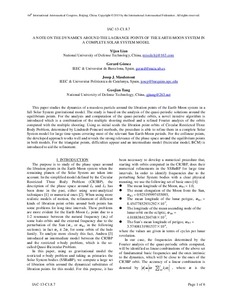 Tang, Guojian
Document typeConference report
Rights accessOpen Access
Abstract
This paper studies the dynamics of a massless particle around the libration points of the Earth - Moon system in a full Solar System gravitational model. The study is based on the analysis of the quasi - periodic solutions around the equilibrium points. For the analysis and computation of the quasi - periodic orbits, a novel iterative algorithm is introduced which is a combination of the multiple shooti ng method and a refined Fourier analysis of the orbits computed with the multiple shooting. Using as initial seeds the libration point orbits of Circular Restricted Three Body Problem, determined by Lindstedt - Poincar é methods, the procedure is able to refi ne them in a complete Solar System model for large time - spans covering most of the relevant Sun - Earth - Moon periods. For the collinear points, the developed approach works well and reveals the strong relevance of the phase space around the equilibrium point s in both models. For the triangular points, difficulties appear and an intermediate model (bicircular model, BCM) is introduced to aid the refinement.
CitationLian, Yijun [et al.]. A note on the dynamics around the Lagrange points of the Earth-Moon system in a complete Solar System model. A: International Astronautical Congress. "64rd International Astronautical Congress". 2013, p. 1-13.
URIhttp://hdl.handle.net/2117/21806
ISBN978-161839805-5
Publisher versionhttp://www.iac2013.org/
Collections
Share: