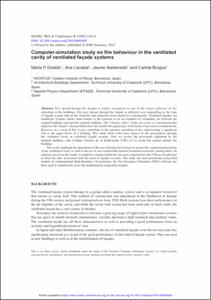 Burgos Leiva, Camila
Document typeConference report
PublisherEDP Sciences
Rights accessOpen Access
Abstract
Fire spread through the façades is widely recognized as one of the fastest pathways of fire spreading in the buildings. Fire may spread through the façade in different ways depending on the type of façade system and on the elements and materials from which it is constructed. Ventilated façades are multilayer systems whose main feature is the creation of an air chamber of circulating air between the original building wall and the external cladding. The “chimney effect” in the air cavity is a mechanism that improves the façade’s thermal behaviour and avoids the appearance of moisture from rain or condensation. However, in a event of fire, it may contribute to the quickest spreading of fire, representing a significant risk to the upper floors of a building. This study deals with some aspects of fire propagation through the ventilated cavity in ventilated façade systems. Also we review the provisions stipulated by the Spanish building code (Código Técnico de la Edificación, CTE) [1] to avoid fire spread outside the building. The results highlight the importance of the use of proper fire barriers to ensure the compartmentalization of the ventilated cavity, as well as the use of non-combustible thermal insulation materials, among others. In addition, based on the results, it might be considered that the measures stipulated by the CTE are insufficient to limit the risks associated with this kind of façades systems. The study has been performed using field models of computational fluid-dynamics. In particular, the Fire Dynamics Simulator (FDS) software has been used to numerically solve the mathematical integration models.
CitationLacasta, A.M [et al.]. Computer-simulation study on fire behaviour in the ventilated cavity of ventilated façade systems. A: International Seminar for Fire Safety of Facades. "MATEC Web of Conferences Vol. 9: 1st International Seminar for Fire Safety of Facades: Paris, France, November 14–15, 2013". París: EDP Sciences, 2013, p. 03002-1-03002-11.
URIhttp://hdl.handle.net/2117/21774
DOI10.1051/matecconf/20130903002
ISBN978-2-7598-1100-7
Collections
Share: