On the computational security of a distributed key distribution scheme 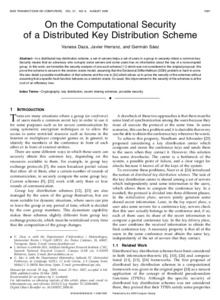 Document typeArticle
PublisherIEEE
Rights accessOpen Access
Abstract
In a distributed key distribution scheme, a set of servers helps a set of users in a group to securely obtain a common key. Security means that an adversary who corrupts some servers and some users has no information about the key of a noncorrupted group. In this work, we formalize the security analysis of one such scheme [ 11] which was not considered in the original proposal. We prove the scheme is secure in the random oracle model, assuming that the Decisional Diffie-Hellman (DDH) problem is hard to solve. We also detail a possible modification of that scheme and the one in [ 24] which allows us to prove the security of the schemes without assuming that a specific hash function behaves as a random oracle. As usual, this improvement in the security of the schemes is at the cost of an efficiency loss.
CitationDaza,V.; Herranz, J.; Sáez, G. On the computational securituy of a distributed key distribution scheme. IEEE transactions on computers, 2008, vol. 57, núm. 8, p. 1087-1097.
URIhttp://hdl.handle.net/2117/2170
ISSN0018-9340
Collections
Share: