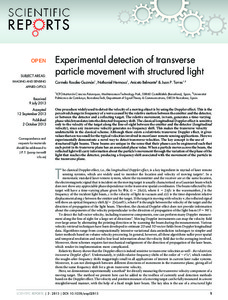 Document typeArticle
PublisherMACMILLAN PUBLISHERS LIMITED
Rights accessOpen Access
European Commission's projectPHORBITECH - A Toolbox for Photon Orbital Angular Momentum Technology (EC-FP7-255914)
Abstract
One procedure widely used to detect the velocity of a moving object is by using the Doppler effect. This is the perceived change in frequency of a wave caused by the relative motion between the emitter and the detector, or between the detector and a reflecting target. The relative movement, in turn, generates a time-varying phase which translates into the detected frequency shift. The classical longitudinal Doppler effect is sensitive only to the velocity of the target along the line-of-sight between the emitter and the detector (longitudinal velocity), since any transverse velocity generates no frequency shift. This makes the transverse velocity undetectable in the classical scheme. Although there exists a relativistic transverse Doppler effect, it gives values that are too small for the typical velocities involved in most laser remote sensing applications. Here we experimentally demonstrate a novel way to detect transverse velocities. The key concept is the use of structured light beams. These beams are unique in the sense that their phases can be engineered such that each point in its transverse plane has an associated phase value. When a particle moves across the beam, the reflected light will carry information about the particle’s movement through the variation of the phase of the light that reaches the detector, producing a frequency shift associated with the movement of the particle in the transverse plane.
CitationRosales, C. [et al.]. Experimental detection of transverse particle movement with structured light. "Scientific reports", 02 Octubre 2013, vol. 3, p. 1-5.
URIhttp://hdl.handle.net/2117/21658
DOI10.1038/srep02815
ISSN2045-2322
Publisher versionhttp://www.nature.com/srep/2013/131002/srep02815/full/srep02815.html
Collections
Share: