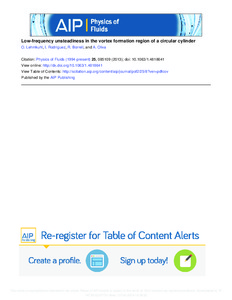 Document typeArticle
Rights accessOpen Access
All rights reserved. This work is protected by the corresponding intellectual and industrial property rights. Without prejudice to any existing legal exemptions, reproduction, distribution, public communication or transformation of this work are prohibited without permission of the copyright holder
Abstract
The presence of low-frequency fluctuations in the wake of bluff bodies have been observed in several investigations. Even though the flow past a circular cylinder at Re = 3900 (Re = U ref D/ν) has been the object of several experimental and numerical investigations, there is a large scattering in the average statistics in the near wake. In the present work, the flow dynamics of the near wake region behind a circular cylinder has been investigated by means of direct numerical simulations and statistics have been computed for more than 858 shedding cycles. The analysis of instantaneous velocity signals of several probes located in the vortex formation region, point out the existence of a low-frequency fluctuation at the non-dimensional frequency of f m = 0.0064. This large-scale almost periodic motion seems to be related with the modulation of the recirculation bubble which causes its shrinking and enlargement over the time. Two different configurations have been identified: (i) a high-energy mode with larger fluctuations in the shear-layer and in the vortex formation region (Mode H) and (ii) a low-energy mode with weaker fluctuations in the shear layer (Mode L). The influence of such a low-frequency in the wake topology has been studied not only by means of the phase-average flow field for each mode, but also by the analysis of the time-average first- and second-order statistics of each wake mode. The results are compared with the long-term averaged solution and with results in the existing literature.
Description
Electronic version of an article published as "Physics of fluids", vol. 25, no 8, 2013. DOI: http://dx.doi.org/10.1063/1.4818641.
CitationLehmkuhl, O. [et al.]. Low-frequency unsteadiness in the vortex formation region of a circular cylinder. "Physics of fluids", 23 Agost 2013, vol. 25, núm. 8, p. 085109-085109-21.
URIhttp://hdl.handle.net/2117/21548
DOI10.1063/1.4818641
ISSN1070-6631
Publisher versionhttp://link.aip.org/link/doi/10.1063/1.4818641
Collections
Share: