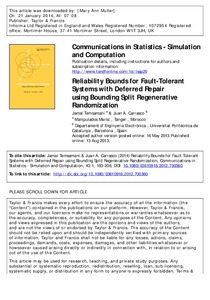 Document typeArticle
Rights accessOpen Access
Abstract
A numerically stable method is developed which computes seemingly tight bounds at a small computational cost relative to the model size, when that model size is large, for the unreliability and bounds for the unreliability using, respectively, exact and bounding failure/repair continuous-time Markov chain models of fault-tolerant systems with exponential failure and repair time distributions, in which repair is deferred until some condition on the collection of failed components is satisfied, and, then, proceeds until reaching the state without failed components, with failure rates much smaller than repair rates and not too different output rates from states with deferred repair.
CitationTemsamani, J.; Carrasco, J. Reliability bounds for fault-tolerant systems with deferred repair using bounding split regenerative randomization. "Communications in statistics. Simulation and computation", Agost 2013, vol. 43, núm. 1, p. 183-208.
URIhttp://hdl.handle.net/2117/21510
DOI10.1080/03610918.2012.700360
ISSN0361-0918
Collections
Share: