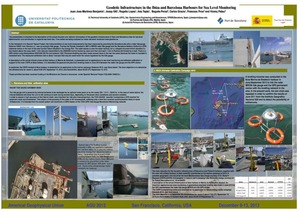 Pros Llavador, Francesc
Palau Teixidó, Vicenç
Document typeConference lecture
Rights accessOpen Access
Abstract
The presentation is directed to the description of the actual situation and relevant information of the geodetic infrastructure of Ibiza and Barcelona sites for sea level determination and contribution to regional sea level rise. Time series are being analysed for mean sea level variations www.puertos.es. .In the framework of a Spanish Space Project, the instrumentation of sea level measurements has been improved by providing the Barcelona site with a radar tide gauge Datamar 2000C from Geonica s.l. near an acoustic tide gauge. Puertos del Estado installed in 2007 a MIROS radar tide gauge and the Barcelona Harbour Authority a GPS referente station in the roof of the new Control Tower situated in the Energy Pier. The radar sensor is over the water surface, on a L-shaped structure which elevates it a few meters above the quay shelf. 1-min data are transmitted to the ENAGAS Control Center by cable and then sent each 1 min to Puertos del Estado by e-mail. There is a GPS station Leica Geosystems GRX1200 GG Pro and antenna 1202. Precision levelling has been made several times in the last two years because the tower is founded in reclaimed land. The measured settlement rate is about 1cm/year that may be could mask the values registered by the tide gauge. A description of the actual infrastructure at Ibiza harbour at Marina de Botafoch, is presented and its applications to sea level monitoring and altimeter calibration in support of the main CGPS at Ibiza harbour. It is described the geometrical precision levelling made in June 2013 between the radar tide gauge and the GPS station. In particular, the CGPS located at Ibiza harbour is essential for its application to the marine campaign Baleares 2013, near Ibiza island. The main objective is to determine the altimeter bias for Jason-2, about 9:09 UTC September 15, 2013, and Saral/AltiKa, about 05:30 UTC September 16, UTC. These activities has been received funding of the Ministerio de Ciencia e Innovacion under Spanish National Project CGL2009-13435/CLI.
CitationMartinez, J.J. [et al.]. Geodetic infraestructure in the Ibiza and Barcelona harbours for sea level monitoring. A: American Geophysical Union Fall Meeting. "2013 AGU Fall meeting : eposters". San Francisco: 2013, p. 1.
URIhttp://hdl.handle.net/2117/21509
Collections
Share: