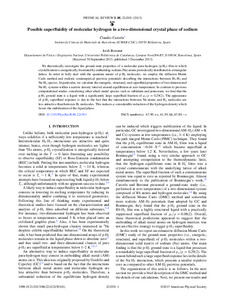 Document typeArticle
Rights accessOpen Access
Abstract
We theoretically investigate the ground-state properties of a molecular para-hydrogen (p-H 2 ) film in which crystallization is energetically frustrated by embedding sodium (Na) atoms periodically distributed in a triangular lattice. In order to fully deal with the quantum nature of p-H 2 molecules, we employ the diffusion Monte Carlo method and realistic semiempirical pairwise potentials describing the interactions between H 2 -H 2 and Na-H 2 species. In particular, we calculate the energetic, structural, and superfluid properties of two-dimensional Na-H 2 systems within a narrow density interval around equilibrium at zero temperature. In contrast to previous computational studies considering other alkali metal species such as rubidium and potassium, we find that the p-H 2 ground state is a liquid with a significantly large superfluid fraction of ρ s /ρ=0.29(2) . The appearance of p-H 2 superfluid response is due to the fact that the interactions between Na atoms and H 2 molecules are less attractive than between H 2 molecules. This induces a considerable reduction of the hydrogen density which favors the stabilization of the liquid phase.
CitationCazorla, C.; Boronat, J. Possible superfluidity of molecular hydrogen in a two-dimensional crystal phase of sodium. "Physical review B: condensed matter and materials physics", 03 Desembre 2013, vol. 88, núm. 22, p. 224501-1-224501-6.
URIhttp://hdl.handle.net/2117/21500
DOI10.1103/PhysRevB.88.224501
ISSN1098-0121
Publisher versionhttp://prb.aps.org/abstract/PRB/v88/i22/e224501
Collections
Share: