Health and confort in the XIX century: the case of heating and ventilacion in Barcelona 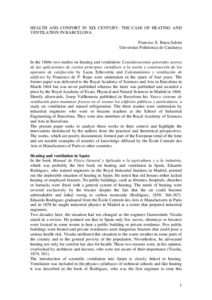 Document typeExternal research report
Rights accessOpen Access
Abstract
In the 1860s two studies on heating and ventilation: Consideraciones generales acerca de las aplicaciones de ciertos principios científicos a la teoría y construcción de los aparatos de calefacción by Lucas Echeverria and Calentamiento y ventilación de edificios by Francisco de P. Rojas were undertaken in the space of four years. The former paper was delivered to the Royal Academy of Sciences and Arts in Barcelona in March 1864 but was never published whereas the latter was published and awarded a prize by the Royal Academy of Exact, Physical and Natural Sciences in Madrid in 1868. Shortly afterwards, Josep Vallhonesta published in Barcelona his Nuevo sistema de ventilación para mantener frescos en el verano los edificios públicos y particulares, a study on ventilation and natural refrigeration. The three studies were undertaken by industrial engineers who were or became teachers at the School of Industrial Engineering of Barcelona. They were also members of the Royal Academy of Sciences and Arts in Barcelona. The present paper seeks to analyse these works in their context and highlight the innovations introduced by the authors from the practical and theoretical perspectives. The works, which are poorly documented, formed part of the European trend of the time and are notable examples of transfer of knowledge diffused by the École Centrale des Arts et Manufactures of París to other countries
CitationBarca Salom, Francesc X. "Health and confort in the XIX century: the case of heating and ventilacion in Barcelona". 2014.
URIhttp://hdl.handle.net/2117/21473
Collections
Share: