Direct numerical simulation of a NACA0012 in full stall 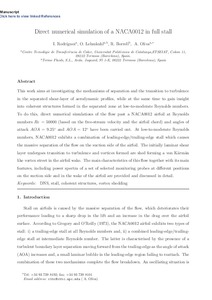 This work aims at investigating the mechanisms of separation and the transition to turbulence in the separated shear-layer of aerodynamic profiles, while at the same time to gain insight into coherent structures formed in the separated zone at low-to-moderate Reynolds numbers. To do this, direct numerical simulations of the flow past a NACA0012 airfoil at Reynolds numbers Re = 50,000 (based on the free-stream velocity and the airfoil chord) and angles of attack AOA = 9.25 and AOA = 12 have been carried out. At low-to-moderate Reynolds numbers, NACA0012 exhibits a combination of leading-edge/trailing-edge stall which causes the massive separation of the flow on the suction side of the airfoil. The initially laminar shear layer undergoes transition to turbulence and vortices formed are shed forming a von Kármán like vortex street in the airfoil wake. The main characteristics of this flow together with its main features, including power spectra of a set of selected monitoring probes at different positions on the suction side and in the wake of the airfoil are provided and discussed in detail.
CitationRodriguez, I. [et al.]. Direct numerical simulation of a NACA0012 in full stall. "International journal of heat and fluid flow", 15 Octubre 2013, vol. 43, p. 194-203.
URIhttp://hdl.handle.net/2117/21438
DOI10.1016/j.ijheatfluidflow.2013.05.002
ISSN0142-727X
Publisher versionhttp://dx.doi.org/10.1016/j.ijheatfluidflow.2013.05.002