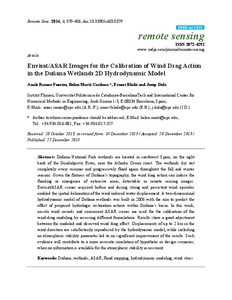 Except where otherwise noted, content on this work is licensed under a Creative Commons license : Attribution-NonCommercial-NoDerivs 3.0 Spain
Abstract
Doñana National Park wetlands are located in southwest Spain, on the right bank of the Guadalquivir River, near the Atlantic Ocean coast. The wetlands dry out completely every summer and progressively flood again throughout the fall and winter seasons. Given the flatness of Doñana’s topography, the wind drag action can induce the flooding or emergence of extensive areas, detectable in remote sensing images. Envisat/ASAR scenes acquired before and during strong and persistent wind episodes enabled the spatial delineation of the wind-induced water displacement. A two-dimensional hydrodynamic model of Doñana wetlands was built in 2006 with the aim to predict the effect of proposed hydrologic restoration actions within Doñana’s basin. In this work, on-site wind records and concurrent ASAR scenes are used for the calibration of the wind-drag modeling by assessing different formulations. Results show a good adjustment between the modeled and observed wind drag effect. Displacements of up to 2 km in the wind direction are satisfactorily reproduced by the hydrodynamic model, while including an atmospheric stability parameter led to no significant improvement of the results. Such evidence will contribute to a more accurate simulation of hypothetic or design scenarios, when no information is available for the atmospheric stability assessment.
CitationRamos, A. [et al.]. Envisat/ASAR images for the calibration of wind drag action in the Doñana wetlands 2D hydrodynamic model. "Remote Sensing", 2014, vol. 6, p. 379-406.
URIhttp://hdl.handle.net/2117/21398
DOI10.3390/rs6010379
ISSN2072-4292
Collections
Share: