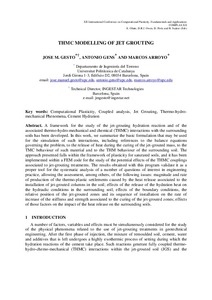 A framework for the study of the jet-grouting hydration reaction and of the associated thermo-hydro-mechanical and chemical (THMC) interactions with the surrounding soils has been developed. In this work, we summarize the basic formulation that may be used for the simulation of such interactions, including references to the balance equations governing the problem, to the release of heat during the curing of the jet-grouted mass, to the TMC behaviour of such material and to the THM behaviour of the surrounding soil. The approach presented falls within the framework of plasticity for saturated soils, and it has been implemented within a FEM code for the study of the potential effects of the THMC couplings associated to jet-grouting treatments. The results obtained with this program validate it as a proper tool for the systematic analysis of a number of questions of interest in engineering practice, allowing the assessment, among others, of the following issues: magnitude and rate of production of the thermo-plastic settlements caused by the heat release associated to the installation of jet-grouted columns in the soil; effects of the release of the hydration heat on the hydraulic conditions in the surrounding soil; effects of the boundary conditions, the relative position of the jet-grouted zones and its sequence of installation on the rate of increase of the stiffness and strength associated to the curing of the jet-grouted zones; effects of those factors on the impact of the heat release on the surrounding soils.
CitationGesto, J.M; Gens, A.; Arroyo, M. THMC modelling of jet grouting. A: International Conference on Computational Plasticity Fundamentals and Applications. "Computational Plasticity XII: Fundamentals and Applications - Proceedings of the 12th International Conference on Computational Plasticity". Barcelona: 2013, p. 1353-1359.
URIhttp://hdl.handle.net/2117/21345
ISBN978-849415315-0
Publisher versionhttp://congress.cimne.com/complas2013/proceedings/