Sea state effect on the sea surface emissivity at L-band 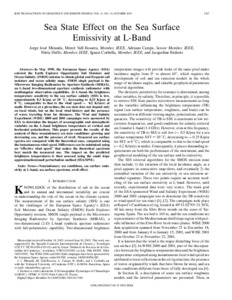 Etcheto, Jacqueline
Document typeArticle
PublisherIEEE-INST ELECTRICAL ELECTRONICS ENGINEERS INC
Rights accessOpen Access
All rights reserved. This work is protected by the corresponding intellectual and industrial property rights. Without prejudice to any existing legal exemptions, reproduction, distribution, public communication or transformation of this work are prohibited without permission of the copyright holder
Abstract
In May 1999, the European Space Agency (ESA) selected the Earth Explorer Opportunity Soil Moisture and Ocean Salinity (SMOS) mission to obtain global and frequent soil moisture and ocean salinity maps. SMOS' single payload is the Microwave Imaging Radiometer by Aperture Synthesis (MIRAS), an L-band two-dimensional aperture synthesis radiometer with multiangular observation capabilities. At L-band, the brightness temperature sensitivity to the sea surface salinity (SSS) is low, approximately 0.5 K/psu at 20/spl deg/C, decreasing to 0.25 K/psu at 0/spl deg/C, comparable to that to the wind speed /spl sim/0.2 K/(m/s) at nadir. However, at a given time, the sea state does not depend only on local winds, but on the local wind history and the presence of waves traveling from far distances. The Wind and Salinity Experiment (WISE) 2000 and 2001 campaigns were sponsored by ESA to determine the impact of oceanographic and atmospheric variables on the L-band brightness temperature at vertical and horizontal polarizations. This paper presents the results of the analysis of three nonstationary sea state conditions: growing and decreasing sea, and the presence of swell. Measured sea surface spectra are compared with the theoretical ones, computed using the instantaneous wind speed. Differences can be minimized using an "effective wind speed" that makes the theoretical spectrum best match the measured one. The impact on the predicted brightness temperatures is then assessed using the small slope approximation/small perturbation method (SSA/SPM).
CitationMiranda, J.; Vall-llossera, M.; Camps, A.; Duffo, N.; Corbella, I.; Etcheto, J. Sea state effect on the sea surface emissivity at L-band. IEEE Transactions on geoscience and remote sensing, 2003, vol. 41, núm. 10, p. 2307-2315.
URIhttp://hdl.handle.net/2117/2130
ISSN0196-2892
Collections
Share: