Mineralization of DNA into nanoparticles of hydroxyapatite 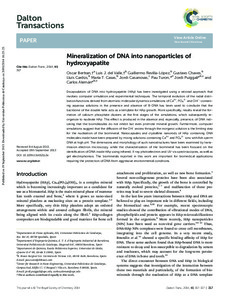 Document typeArticle
Rights accessOpen Access
All rights reserved. This work is protected by the corresponding intellectual and industrial property rights. Without prejudice to any existing legal exemptions, reproduction, distribution, public communication or transformation of this work are prohibited without permission of the copyright holder
Abstract
Encapsulation of DNA into hydroxyapatite (HAp) has been investigated using a rational approach that involves computer simulation and experimental techniques. The temporal evolution of the radial distribution functions derived from atomistic molecular dynamics simulations of Ca2+, PO4 3− and OH−-containing aqueous solutions in the presence and absence of B-DNA has been used to conclude that the backbone of the double helix acts as a template for HAp growth. More specifically, results reveal the formation of calcium phosphate clusters at the first stages of the simulations, which subsequently reorganize to nucleate HAp. This effect is produced in the absence and, especially, presence, of DNA indicating that the biomolecules do not inhibit but even promote mineral growth. Furthermore, computer simulations suggest that the diffusion of the OH− anions through the inorganic solution is the limiting step for the nucleation of the biomineral. Nanocapsules and crystalline nanorods of HAp containing DNA molecules inside have been prepared by mixing solutions containing Ca2+ and PO4 3− ions with fish sperm DNA at high pH. The dimensions and morphology of such nanostructures have been examined by transmission electron microscopy, while the characterization of the biomineral has been focused on the identification of DNA inside HAp using infrared, X-ray photoelectron and UV-vis spectroscopies, as well as gel electrophoresis. The biominerals reported in this work are important for biomedical applications requiring the protection of DNA from aggressive environmental conditions
CitationBertran, O. [et al.]. Mineralization of DNA into nanoparticles of hydroxyapatite. "Dalton transactions", 07 Gener 2014, vol. 43, núm. 1, p. 317-327.
URIhttp://hdl.handle.net/2117/21289
DOI10.1039/c3dt52112e
ISSN1477-9226
Publisher versionhttp://pubs.rsc.org/en/Content/ArticleLanding/2014/DT/c3dt52112e
Collections
Share: