Locating domination in graphs and their complements 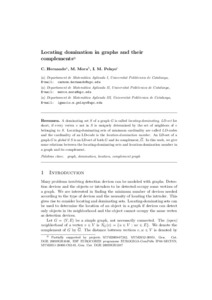 Document typePart of book or chapter of book
PublisherUniversidad de Sevilla
Rights accessOpen Access
Abstract
A dominating set S of a graph G is called locating-dominating , LD-set for short, if every vertex v not in S is uniquely determined by the set of neighbors of v belonging to S . Locating-dominating sets of minimum cardinality are called LD -codes and the cardinality of an LD-code is the location-domination number . An LD-set of a graph G is global if S is an LD-set of both G and its complement, G . In this work, we give some relations between the locating-dominating sets and location-domination number in a graph and its complement
CitationHernando, M.; Mora, M.; Pelayo, I. Locating domination in graphs and their complements. A: "Avances en Matem atica Discreta en Andaluc a (Vol. III)". Sevilla: Universidad de Sevilla, 2013, p. 183-190.
URIhttp://hdl.handle.net/2117/21284
ISBN978-84-15881-46-9
Collections
Share: