A two-dimensional doppler-radiometer for earth observation 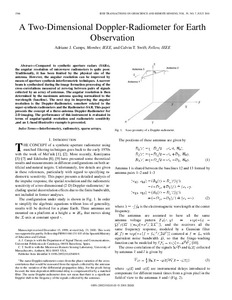 Swift, Calvin T.
Document typeArticle
PublisherIEEE-INST ELECTRICAL ELECTRONICS ENGINEERS INC
Rights accessOpen Access
Abstract
Compared to synthetic aperture radars (SARs), the angular resolution of microwave radiometers is quite poor. Traditionally, it has been limited by the physical size of the antenna. However, the angular resolution can be improved by means of aperture synthesis interferometric techniques. A narrow beam is synthesized during the image formation processing of the cross-correlations measured at zero-lag between pairs of signals collected by an array of antennas. The angular resolution is then determined by the maximum antenna spacing normalized to the wavelength (baseline). The next step in improving the angular resolution is the Doppler-Radiometer, somehow related to the super-synthesis radiometers and the Radiometer-SAR. This paper presents the concept of a three-antenna Doppler-Radiometer for 2D imaging. The performance of this instrument is evaluated in terms of angular/spatial resolution and radiometric sensitivity, and an L-band illustrative example is presented.
CitationCamps, A.; Swift, C. T. A two-dimensional doppler-radiometer for earth observation. IEEE Transactions on geoscience and remote sensing, 2001, vol. 39, núm. 4, p. 1566-1572.
URIhttp://hdl.handle.net/2117/2128
ISSN0196-2892
Collections
Share: