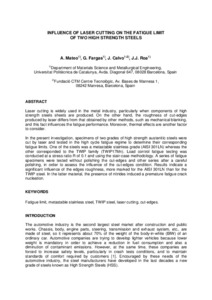 Document typeConference report
Rights accessOpen Access
Abstract
Laser cutting is widely used in the metal industry, particularly when components of high strength steels sheets are produced. On the other hand, the roughness of cut - edges produced by laser differs from that obt ained by other methods, such as mechanical blank ing, and this fact influence s the fatigue performance. Moreover, thermal effects are another factor to consider. In the present investigation, specimens of two grades of high strength austenitic steels were cut by laser and tested in the high cycle fatigue regime to determine their corresponding fatigue limits. One of the steels was a metastable stainless grade (AISI 301LN) whereas the other corresponded to the TWIP family (TWIP17Mn). Load control fatigue te sting was conducted at a stress ratio R of 0.1 and using the stair - case methodology. A series of fatigue specimens were tested without polishing the cut - edges and other s eries after a careful polishing, in order to assess the influence of the cut - edges con dition. R esults indicate a significant influence of the edges roughness, more marked for the AISI 301LN than for the TWIP steel. In the latter material, the presence of nitrides induced a premature fatigue crack nucleation
CitationMateo, A. [et al.]. INFLUENCE OF LASER CUTTING ON THE FATIGUE LIMIT OF TWO HIGH STRENGTH STEELS. A: International conference on Low cycle fatigue. "seventh int conf Low Cycle Fatigue". Aachen: 2013, p. 295-300.
URIhttp://hdl.handle.net/2117/21279
ISBN978-3-9814516-2-7
Collections
Share: