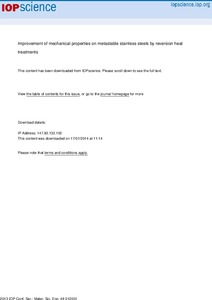 Document typeArticle
PublisherIOP Publishing. Institute of Physics
Rights accessOpen Access
Abstract
AISI 301LN is a metastable austenitic stainless steel that offers an excellent combination of high strength and ductility. This stainless grade is currently used in applications where severe forming operations are required, such as automotive bodies. When these metastable steels are plastically deformed at room temperature, for example by cold rolling, austenite transforms to martensite and, as a result, yield strength increases but ductility is reduced. Grain refinement is the only method that allows improving strength and ductility simultaneously. Several researchers have demonstrated that fine grain AISI 301LN can be obtained by heat treatment after cold rolling. This heat treatment is called reversion because it provokes the reversion of strain induced martens ite to austenite. In the present work, sheets of AISI 301LN previously subjected to 20% of cold rolling reduction were treated and a refined grain austenitic microstructure was obtained. M echanical properties, including fatigue limit, were determined and compared with those corres ponding to the steel both before and after the cold rolling.
CitationMateo, A.; Zapata, A.; Fargas, G. Improvement of mechanical properties on metastable stainless steels by reversion heat treatments. "IOP Conference Series: Materials Science and Engineering (Online)", 21 Març 2013, vol. 48, núm. 012001, p. 1-7.
URIhttp://hdl.handle.net/2117/21260
DOI10.1088/1757-899X/48/1/012001
ISSN1757-899X
Collections
Share: