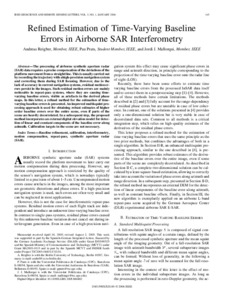 The processing of airborne synthetic aperture radar (SAR) data requires a precise compensation of the deviations of the platform movement from a straight line. This is usually carried out by recording the trajectory with a high-precision navigation system and correcting them during SAR focusing. However, due to the lack of accuracy in current navigation systems, residual motion errors persist in the images. Such residual motion errors are mainly noticeable in repeat-pass systems, where they are causing time-varying baseline errors, visible as artefacts in the derived phase maps. In this letter, a refined method for the estimation of time-varying baseline errors is presented. An improved multisquint processing approach is used for obtaining robust estimates of higher order baseline errors over the entire scene, even if parts of the scene are heavily decorrelated. In a subsequent step, the proposed method incorporates an external digital elevation model for detection of linear and constant components of the baseline error along azimuth. Calibration targets in the scene are not necessary.
CitationReigber, A.; Prats, P.; Mallorqui, J. J. Refined estimation of time-varying baseline errors in airborne SAR interferometry. IEEE Geoscience and remote sensing letters, 2006, vol. 3, núm. 3, p. 145-149.
URIhttp://hdl.handle.net/2117/2117
ISSN1545-598X