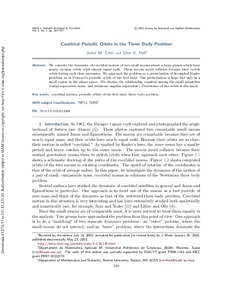 Hall, G.R.
Document typeArticle
Rights accessOpen Access
Abstract
We consider the dynamics of coorbital motion of two small moons about a large planet which have nearly circular orbits with almost equal radii. These moons avoid collision because they switch orbits during each close encounter. We approach the problem as a perturbation of decoupled Kepler problems as in Poincar ́ e’s periodic orbits of the first kind. The perturbation is large but only in a small region in the phase space. We discuss the relationship required among the small quantities (radial separation, mass, and minimum angular separation). Persistence of the orbits is discussed.
CitationCors, J.; Hall, G. Coorbital periodic orbits in the three body problem. "SIAM journal on applied mathematics", Maig 2003, vol. 2, núm. 2, p. 219-237.
URIhttp://hdl.handle.net/2117/21120
DOI10.1137/S1111111102411304
ISSN0036-1399
Publisher versionhttp://www.siam.org/journals/siads/2-2/41130.html
Collections
Share: