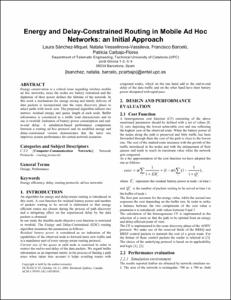 Energy conservation is a critical issue regarding wireless mobile ad hoc networks, since the nodes are battery restrained and the depletion of their power defines the lifetime of the network. In this work a mechanism for energy saving and timely delivery of data packets is incorporated into the route discovery phase to select paths with lower cost. The proposed algorithm utilizes two metrics: residual energy and queue length at each node. Buffer information is considered as a traffic load characteristic and its use is twofold: limitation of battery power consumption and end-to-end delay. A simulation-based performance comparison between a routing ad hoc protocol and its modified energy and delay-constrained version demonstrates that the latter one improves system performance for certain network scenarios.
CitationSánchez Miquel, Laura. [et al.]. Energy and delay-constrained routing in mobile ad hoc networks: an initial approach. A: "Proceedings of the 2nd ACM international workshop on Performance evaluation of wireless ad hoc, sensor, and ubiquitous networks". p.1-2
URIhttp://hdl.handle.net/2117/2108
ISSN1-59593-182-1