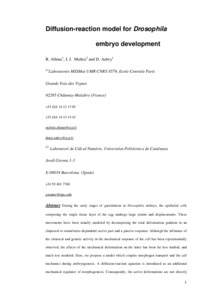 Aubry, Denis
Document typeArticle
PublisherGordon and Breach Science Publishers
Rights accessOpen Access
Abstract
During the early stages of gastrulation in Drosophila embryo, the epithelial cells composing the single tissue layer of the egg undergo large strains and displacements. These movements have been usually modeled by decomposing the total deformation gradient in an (imposed or strain/stress dependent) active part and a passive response. Although the influence of the chemical and genetic activity in the mechanical response of the cell has been experimentally observed, the effects of the mechanical deformation on the latter has been far less studied, and much less modeled. Here, we propose a model which couples morphogen transport and the cell mechanics during embryogenesis. A diffusion-reaction equation is introduced as an additional mechanical regulator of morphogenesis. Consequently, the active deformations are not directly 2 imposed in the analytical formulation, but they rather depend on the morphogen concentration, which is introduced as a new variable. In this work, we show that similar strain patterns to those observed during biological experiments can be reproduced by properly combining the two phenomena. Additionally, we use a novel technique to parameterize the embryo geometry by solving two Laplace problems with specific boundary conditions. We apply the method to two morphogenetic movements: ventral furrow invagination and germ band extension. The matching between our results and the observed experimental deformations confirms that diffusion-reaction of morphogens can actually be controlling large morphogenetic movements.
CitationAllena, R.; Muñoz, J.; Aubry, D. Diffusion-reaction model for Drosophila embryo development. "Computer methods in biomechanics and biomedical engineering", 04 Octubre 2011, vol. 16, núm. 3, p. 235-248.
URIhttp://hdl.handle.net/2117/21063
DOI10.1080/10255842.2011.616944
ISSN1025-5842
Publisher versionhttp://www.tandfonline.com/doi/abs/10.1080/10255842.2011.616944
Collections
Share: